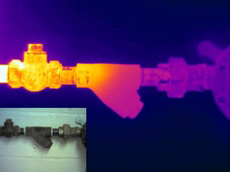 Steam systems virtually all rely on steam traps for their control and efficient operation. Steam traps act as selective valves which allow liquid condensate, air, and other incondensable gasses to pass while still retaining the steam. This allows the steam system to be drained properly and ensures the maximum efficiency and use of the heat in the steam.

Steam trap failure can be hard to spot but often leads to operational problems and significant energy waste. A single malfunctioning steam trap can pass enough steam to waste hundreds or even thousands of dollars each year. Thermal imaging is an excellent tool for locating failing steam traps and is an extremely useful part of an effective steam trap maintenance program.

Steam traps can fail in either a closed or open state. If it fails while open, the failure may be caused by dirt or debris preventing the trap from closing properly. The open steam trap allows steam to escape into the condensate system, which is clearly a huge waste of energy. When steam traps fail in a closed state, they prevent condensate from being discharged into the steam system. The condensate acts as a barrier and prevents heat exchange, which will reduce the performance of a heating system. Heat exchangers can also fill with condensate, preventing steam from entering them.

Whether an open or closed failure, it's important to contact us and get a steam trap failure fixed right away. These problems greatly reduce the efficiency of the heating system, reducing heating efficiency and wasting both energy and your money. Our technicians are experienced in identifying and fixing failed steam traps, no matter the cause for failure.

Besides offering experienced repair for steam trap failures, we also offer thermal imaging audits of your steam system. Thermal imaging is an extremely effective tool for determining the condition of your steam traps-- but this is not the only part of the steam system which can be made more efficient! A thermal imaging camera can be used to quickly and easily locate any missing or damaged insulation. Heat energy can be lost from any un-insulated pipe work by means of radiation and convection.

A thermal audit of a steam system can highlight the location of all areas of heat loss. By knowing the dimensions and apparent temperatures of the areas causing a loss and taking into consideration the environmental factors affecting those areas, the approximate heat loss through the system can be quantified. The savings in energy which can be achieved by preventing such losses can be considerable. During the audit, any leaks in the steam system (which can be the most expensive form of energy loss) can be easily identified and fixed.

Macomb Mechanical has trained technicians available to provide a completed investigation of your steam system including a steam trap audit. Any defective traps can either be replaced or rebuilt. Call today to discuss your steam system with one of our sales engineers.

Get In Touch With Us

At Macomb Mechanical, we are dedicated to providing you with high-quality, efficient services, no matter the job. Call or contact us today to schedule your appointment!